The Let Property Campaign is a way for anyone who has income from letting out a residential property to put their tax affairs in order.

HMRC recognise that some people have purchased a second property as an investment, others have become landlords by accident, perhaps after work-based relocations or through changes to domestic circumstances, such as moving in with a partner or looking after an elderly relative.

HMRC are using more effective measures to identify landlords who have let property and those who come forward voluntarily will still have to pay a penalty of up to 20% – plus the tax and interest – but this compares with penalties of up to 100%, and even the possibility of prosecution.

We can help you make your Let Property Campaign disclosure and make sure you pay the right amount of tax. We undertake a full tax review of all of the undeclared years, helping identify allowable expenses and minimising your tax liability.

Liaise with HMRC on your behalf

We can attend to the initial registration with HMRC's Let Property Campaign. This will set you up on the tax system. Then we'll register you as a client, allowing us to act on your behalf, dealing with HMRC from start to finish.

We undertake a full tax review of all the undeclared years and ensure all allowable expenses and are claimed to help minimise your tax liability.

We have designed our service to be as easy and pain free as possible. 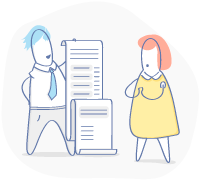 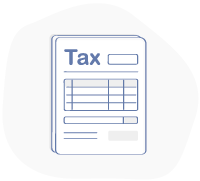 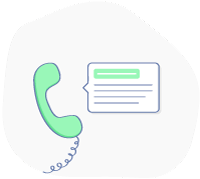 We will spend time talking to you and understanding your circumstances. Then we'll explain the disclosure process and the financial consequences of disclosing.

We will carry out a careful analysis of your running and maintenance expenses so as to determine which ones are allowable as a revenue deduction. These can help to minimise your tax liability.

For each affected year we will carry out a tax review based on the information you have have provided.

We then calculate the tax, interest and penalties for the affected years. Next we will discuss the total amount due and how and when this will be paid to HM Revenue & Customs.

With your agreement we will then make a full disclosure to HM Revenue & Customs under the Let Property Campaign. We can also help negotiate payment terms prior to the disclosure.

We will attend to subsequent queries that HM Revenue & Customs might have. Finally we will also give you advice on ensuring you are compliant in future.

We just need a few details and we'll be in touch shortly. 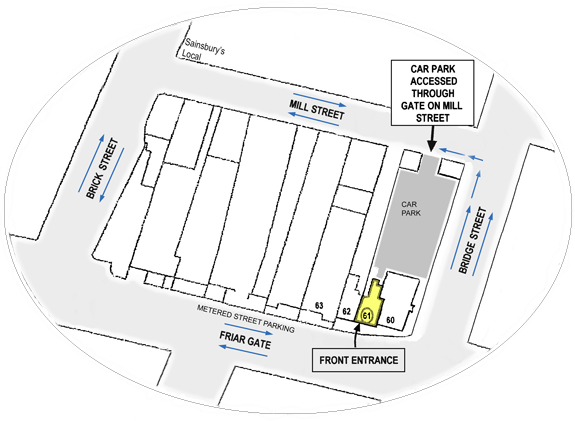 GET IN TOUCH
WITH US

We offer guidance on making a disclosure under this current campaign to help minimise your tax liability.

We will talk with you about your circumstances and help you to claim all the expenses that you are entitled to, ensuring you only pay the tax that you owe.

WHAT IS THE CAMPAIGN?

WHAT IS THE CAMPAIGN?

The Let Property Campaign is a disclosure opportunity which is aimed at landlords who have not declared their rental income. HMRC's aim is to recover lost revenues, going back up to twenty years, using new systems to identify landlords.

HMRC will use information it holds about property rental in the UK and abroad, including Land Registry data, along with information from their new state of the art digital intelligence system Connect to cross check.

Once identified landlords are asked to join the campaign. This starts the process of calculating the tax, interest and penalties due.

If you make a voluntary disclosure to HMRC we can negotiate lower penalties saving you a considerable amount in some cases. See the Government’s page on the campaign.

If HMRC's systems flag you up as possibly having an undeclared rental property they will send you a letter saying that they are aware you're a landlord letting property and that tax might be due on the rental income.

Once you receive the letter there is a deadline of 30 days during which you must respond and in due course make a Let Property Declaration or tell them that:

If these don't apply you are given 3 months to calculate your tax and arrange payment.

If you do not act promptly when you have received a letter the penalties can be steep and in some cases they have the power to bring criminal proceedings.

HOW IS THE BILL CALCULATED?

Your bill is calculated by working out the tax you would have owed for each year of undeclared income and then adding interest and penalties.

To work out the tax owed, you have to calculate the profit/loss from each rental property.  The rates of tax you’ll pay depend on how much income you earn above your personal allowance which is an annual amount of tax free income.

Interest and penalties are then added to the tax.

The level of penalties will depend on your individual circumstances.

The percentage rates below should be considered as a guideline:

HMRC are actively targeting landlords who they know have undeclared rental income with a 'prompted' Let Property Campaign letter.

Throughout July and August 2018, HMRC sent the huge batch of 'Let Property Campaign' letters to landlords and other buy-to-let investors with undeclared rental income. This wave of letters largely targets accidental landlords with 1 or two rental properties. 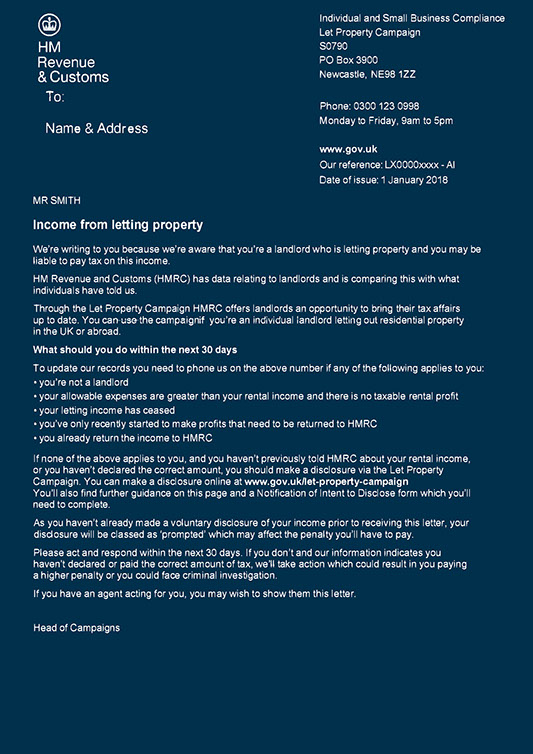 HAVEN'T RECEIVED A LETTER? SHOULD I DISCLOSE?

This is an opportunity to stop worrying about what might happen.  if you do not come forward and HMRC finds later that you’re behind with your tax, it may be harder to convince them that it was simply a mistake. The law allows HMRC to go back up to 20 years and in serious cases HMRC may carry out a criminal investigation.

With the reduced penalties on unprompted disclosures it is good idea to start the process before you get a letter. HMRC is currently increasing its targeted compliance activity across all landlord types and their state-of-the-art analytical computer system ‘Connect’ cross-references various databases to identify landlords who are not currently fulfilling their tax obligations.

Do not worry if you cannot afford to pay what you owe in one lump sum, if your circumstances warrant it, you’ll be able to spread your payments.

If you have not received a letter from HMRC but your circumstances fit any of the following then you should consider making a disclosure:

The campaign is not open to those landlords who are letting out non-residential properties such as a shop, garage or lock up. It also cannot be used by those wishing to disclose income on behalf of a company or a trust.

FREE PARKING IN OUR CAR PARK

If you have properties to declare then get in touch and we will talk it over with you.  We can then provide you with a fixed fee, no obligation quote.

Registered to carry out audit work in the UK by The Association of Chartered Certified Accountants.

Details of audit registration can be viewed at www.auditregister.org.uk under number 8011438.